On Tuesday, the 12th of January, the cross-party Kosovo friendship group in the European Parliament met with the Acting President of the Republic of Kosovo, Vjosa Osmani, to discuss recent developments and the continuation of Kosovo’s European path. MEP Lukas Mandl, who is the Head of the Kosovo friendship group, stated that „Political stability, reforms and good neighborly relations are essential for Kosovo’s path towards EU membership. Therefore, it is important that those responsible in Kosovo continue with parliamentary work as soon as possible, build a stable government and elect a person with broad public and political support as head of state. He added that „While Kosovo has to conduct reforms in order to become an EU member, the EU needs to do its homework too. The Union must fulfill its promises and urgently grant visa liberalisation to Kosovo.“ 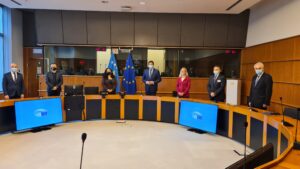