MEP Lukas Mandl on the Ukraine war: Momentum for the European perspective of the six Western Balkan countries

Brussels. “Anyone who starts a war must not be successful. It is the task of our political generation to ensure this for Europe. In doing so, we are giving the next generation the chance of a life without war,“ says Lukas Mandl, ÖVP foreign policy and security spokesperson and deputy chairman of the Defense Committee in the European Parliament, on the Ukraine war.

Mandl is a member of the parliamentary delegation to Bosnia and Herzegovina and Kosovo and chairman of the non-partisan Kosovo Friendship Group and the Kosovo representative of the European People’s Party in the European Parliament. Therefore, he deals intensively with the six states of the Western Balkans. Most recently, Mandl was responsible for the report on combatting organized crime in the Western Balkans as chief negotiator for the European Parliament and headed the EU election observation mission for the local elections in Kosovo in autumn. “The war of aggression against Ukraine, a country that is based on our values ​​of democracy and the rule of law, has led to some irritating developments in the Western Balkans. While five states clearly support Europe’s unity against the Russian attack, there are irritating tendencies on the part of the Serbian leadership, the distancing from the EU, the lack of solidarity towards Ukraine and the understanding for the aggressor,“ Mandl puts it plainly.

“The citizens of Serbia deserve structures at all levels that respect our European values. Europe deserves unity in diversity. Ukraine deserves solidarity and the Russian leadership deserves sanctions with full effect. All EU institutions must now urgently call on Serbia to distance itself clearly from any form of warmongering. Otherwise, the EU accession negotiations would be a futile undertaking. In addition, the normalization of relations with the Republic of Kosovo must be completed immediately, and recognition must be prepared without further ado,“ says Mandl.

The MEP adds: “Now is the time for those five member states that have not yet recognized Kosovo to finally do so. Cyprus, Greece, Romania, Slovakia and Spain should recognize the Republic of Kosovo immediately. That would also be a strong sign of the unity of the European community of values. Objectively, nothing speaks against it, but everything speaks for it. The momentum is now.“

“It is understandable that Commission President Ursula von der Leyen is talking about Ukraine’s EU membership in this situation. But before that happens, the six states of the Western Balkans must finally be admitted. This is a much smaller region, which is much more advanced in its EU maturity“ concludes Mandl. 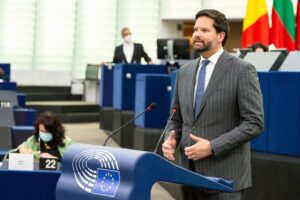