“Full defense and guarantee of religious freedom and not an inch to the Islamists. If we ensure both, the extremists, the representatives of political Islam, will not succeed in dividing our society. Here I expect the European Union to set clear and rapid priorities. Liberal democracy and the rule of law must and will assert themselves”, says Lukas Mandl, foreign policy and security spokesperson for the ÖVP in the European Parliament, in view of the new challenges in the fight against terrorism after the attacks in Vienna, Nice, Paris and Dresden.

“Religious freedom is a fundamental right that Europe must defend internally and externally. Religion can be practiced. This of course applies to Muslims as well as to all other believers and people without a denomination. Religious freedom is one of the greatest achievements of the Enlightenment, which Europe in particular must uphold. Everyone in Europe should know that the freedom to practice religion, including Islam, is protected by the state”, says Mandl.

“But Islamism, political Islam, is not a religion. This distinction is crucial. Islamism is a sick and highly dangerous ideology whose radicalized followers will stop at nothing. That is why Islamism must be closely monitored at all levels and fought even more consistently than before with all available means”, states Mandl.

“The basis for our joint work for religious freedom and our joint fight against Islamism is the establishment of two important institutions at European level. First, we need an observatory for political Islam that keeps an eye on developments across Europe and brings together the findings in the member states. And the position of the EU Special Envoy for Religious Freedom urgently needs to be reintroduced”, says Mandl. “We in Europe now have to work together more closely and networked than ever to track down, document and break up networks of radicalization. We must never accept attacks on our way of life, on our democracy and our rule of law. “ 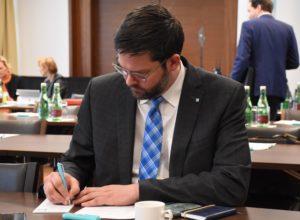