The Delegation for relations with the Korean Peninsula of the European Parliament (DKOR) had a fruitful three-day visit in Seoul, South Korea (19-21 September 2022). DKOR and the National Assembly of Korea held the 22nd Inter-Parliamentary Meeting, the first one since the start of the pandemic (previous one was held in 2019, in Brussels). The Members of the European Parliament met with the Speaker and the deputy-Speaker of the National Assembly, as well as with key Ministers. The Bureau of DKOR had the opportunity to meet with the Prime Minister of South Korea.

In this context, the Chair of the delegation, Mr Lukas MANDL (EPP, AT) underlined the unwavering support of the European Parliament for the EU-South Korea strategic partnership and the determination to further reinforce inter-parliamentary cooperation.

“The European Union and South Korea are close partners, which share a like-minded approach to democracy, freedom and human rights. In a challenging international and regional environment, it is high time to reinforce cooperation and understanding between democracies. Parliamentary diplomacy has a key role to play in this respect.” declared the Chair.

Underlining the significant consequences of the Russian war in Ukraine on European and global security, the Chair welcomed South Korea’s support for Ukraine, for freedom and peace in Europe. “South Korea has a lot of experience in dealing with conventional military threats as well as with hybrid threats. Due to the Russian aggression both kinds of threats form the dominant challenges on European soil these days. I highly appreciate the clear stance of South Korea for freedom and peace” said Mr Mandl.

The Chair equally emphasized “that DKOR is closely following developments and engaging with the Republic of Korea, but also, whenever possible, with the Democratic People’s Republic of Korea, and is therefore ready to contribute to peace in the Peninsula”.

The Vice-Chair of DKOR, Mr César LUENA (S&D, ES) declared: “EU and South Korea are key partners and we were happy to see that following the presidential elections and change of power in South Korea, the country’s vibrant democracy and debates among parties are as active as before. We welcome the adoption of sanctions against Russia by South Korea”.

The Members of the European Parliament had constructive exchanges with their interlocutors on numerous topics, such as the recent developments in the trade relations, including market access for European beef, while “always being aware the outstanding and even unique mutual success of the Free Trade Agreement for both South Korea and the EU”, underlined the Chair, Mr Mandl. EU’s and South Korea’s efforts in combating climate change and in facilitating the energy transition have also been discussed, as well as gender equality and the progress in the ratification of the ILO conventions by South Korea. The human rights situation in North Korea has been a matter of particular concern for the delegation.

The Chair of DKOR, Mr Mandl, equally emphasized “the importance for the EU and South Korea to strengthen cooperation in the fields of security and defence in order to positively contribute to peace and to the respect of global rules”. 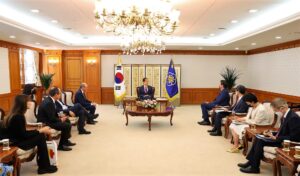