Topical discussion on the Middle East and transatlantic cooperation

Much has changed in the Middle East. This is a great opportunity for Israel’s security, for a closer partnership between the EU and Israel in many areas, for a new form of relations between Arab countries and Israel, which plays a prominent role as the only democratic constitutional state in the region. In view of the coming working years of the European Parliament and a new period in the US administration, I was invited by the European Coalition for Israel (ECI) to speak about these issues as well as about transatlantic cooperation in this context. The conversation with Ambassador Ron Leshno-Yaar (Permanent Representative of Israel to the EU) and Fernando Gentilini, (EEAS Managing Director for the Middle East and North Africa) under the moderation of Tomas Sandell (ECI) can be found here: 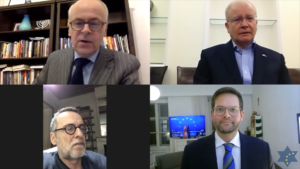